“Frank settled down in the Valley, and he hung his wild years on a nail he drove through his wife’s forehead.” – Tom Waits ForNoMan

Motherfuckin’ Frank Castle.  If comic books are bands, Frank is Black Flag, born in the 70s, dangerous by the 80s, focused to a fault, one-dimensional as a flatline, and by God somebody’s guaranteed to get fucked up by the end of the evening.  The embodiment of the worst fears of parents and social experts of what all music (and comics) would someday become, but never really came to pass.  And the fans never stopped coming back. 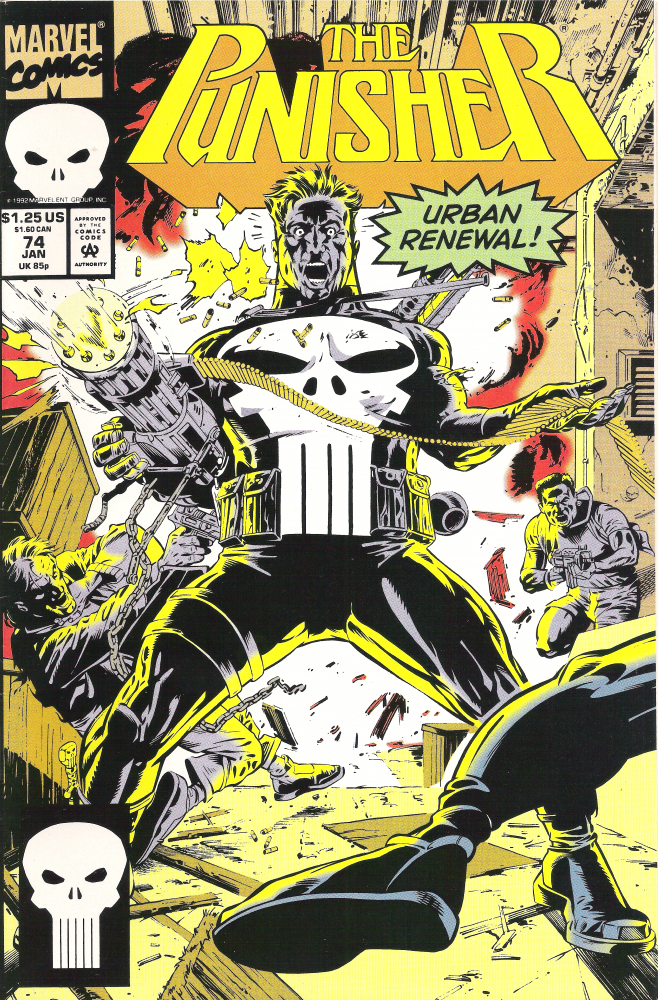 Frank is legendary for his cool head, calm under fire, and progressive stance on complex urban social issues.

As a kid I thought comics were great, I didn’t mind eating my Wheaties for Captain America as long as he threw a few punches around to make it interesting, Spider-man’s one liners were still funny because a cliché’s just a joke the first time you hear it, and Wolverine sure looked badass even with that goofy haircut.  This Punisher guy here with the all-black vibe is kind of cool, pirate flag on his chest, and HOLY SHIT he just blew that guy’s face OFF!!!  They make comic books all about the bad guys, too?  Waitaminute, this is a good guy?

In the 1980’s in the US, boys were exposed to an unprecedented experiment in desensitization to violence.  GI Joe and Cobra blasted the shit out of each other every day for years on end, but everyone was still around at the end for their PSA spot.  Autobots and Decepticons ripped limbs from torsos and just plugged them back in.  Batman and the Joker go round, and round, and round, and the A-team cobbled together firebreathing tanks and rivet gatling guns; rest assured that all the baddies would surrender unharmed by the time the credits rolled.   Pretty much the only overarching message for 80s kids was “violence is freakin’ awesome, and everyone gets to come back tomorrow to do it all over again.”

In Frank’s books, people didn’t get to come back tomorrow.  They didn’t get to come back at all, and if you were writing for Frank Castle, you weren’t recycling shit, Frank was the paper shredder at the end of comic character continuity.  You want your bad guys to still be around for the West Coast Avengers to pound on, you better keep them the hell away from a Punisher book.

So Frank got his own strange little world, sometimes the rest of the Marvel cast would dip in and out, but they never wanted to.  EVERYONE hated him, the good guys, the bad guys, the thugs, the citizens.  Over in the other books, not even the worst villans were so lonely, Dr. Doom had a country, Galactus had the Silver Surfer, even the Sinister Six would occasionally team-up out of boredom.  All Frank had was a single fat computer programmer, a dead family, and you, the faithful reader.  What a wonderful little secret; never had a comic book reader had such a direct connect to a character, hey, this guy NEEDS me, if I don’t read this book, then no one will give a shit about Frank Castle.  And clearly, shits need to be given, because he’s going through all the motions that we grew to know and love with the other 80’s series, but the bad guy doesn’t trail off in the distance, shaking his fist over “To Be Continued…” at the episode finale.   Frank knows how to punctuate the end of his stories.

Which is why we’re here.  The first Punisher continuous series debuted in 1987, and marginally-controlled chaos reigned for another 8 years.  In this book, all Story Arcs ended in tombstones, and Character Development meant finding novel ways for Frank to kill your ass.  Part goofy, a little campy, but 103% fascinating, there was literally nothing like it.

There were some common themes to hold it all together, and no one reads anything on the internet that isn’t a List, so I’ve broken down the reviews.  If you want to hear about plot and all that bullshit there’s tons of websites of reviews that will oblige.  Here I’ve distilled it to the Shit That Matters. Up First, we’ll review Punisher issues #1-5.